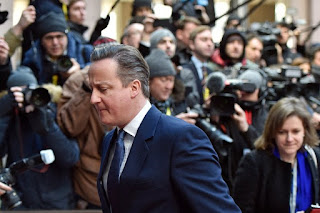 Prime Minister David Cameron of Britain arriving Friday for the second day of a European Union summit meeting in Brussels.

BRUSSELS - European Union leaders agreed on Friday to a deal to overhaul their ties with Britain, opening the way for a high-stakes referendum on whether the bloc’s most ambivalent member country will stay within the union or quit.

After hours of tense talks, all 28 European Union leaders signed off on an agreement covering a variety of issues related to sovereignty, economics and migration, and intended to help keep skeptical Britons within the European Union when they vote on the matter, almost certainly in June.

“I believe this is enough for me to recommend that the United Kingdom remain in the European Union,” said Prime Minister David Cameron of Britain after reaching the agreement at a summit meeting in Brussels, adding that the deal ensured both “special status” for his country and that “Britain will never be part of a European superstate.”

The referendum would be a “once-in-a-generation moment to shape the destiny of our country,” Mr. Cameron added.

Other leaders welcomed the agreement, including Chancellor Angela Merkel of Germany, who said the union had given a package to Mr. Cameron “that will enable him to elicit support in Britain for Britain remaining a member of the European Union.

Mr. Cameron plans to hold a cabinet meeting on Saturday morning and is expected to hold the referendum on June 23. But the divisions within his Conservative Party were underlined by reports that a friend and cabinet colleague, Michael Gove, will campaign to leave the union, a decision that Mr. Cameron said left him “disappointed but not surprised.”

And even after the agreement, the referendum represents a huge gamble because a no vote would have huge ramifications for Europe, as well as for Britain.

Already contending with a record influx of migrants and a weak economic outlook, European leaders are desperate to avoid a British exit, or “Brexit,” which would plunge the bloc into a new crisis, adding to uncertainty about its future.

Nevertheless, the wrangling went on for about 30 hours because some of Mr. Cameron’s requests called into question fundamental principles that have evolved over years of integration in the European Union, such as the members’ commitment to a closer union, the freedom of its citizens to work and live throughout the bloc and their right to equal treatment.

The referendum has been billed by Mr. Cameron as the moment to settle whether Britain should remain a member of the club it joined more than four decades ago. That relationship has become increasingly neuralgic amid concerns about bureaucratic meddling by European policy makers.

In 2013, under pressure from right-wing euroskeptics in his own party, Mr. Cameron promised to call a referendum by the end of 2017, but said he first wanted to renegotiate British ties so he could recommend a vote to stay.

His demands tested the good will of other European partners in the negotiations, which started Thursday and stretched late into Friday night.

Ultimately, he appeared to win most of the battles he had fought over a draft agreement, though this is unlikely to impress euroskeptics.

Among the most delicate concessions Mr. Cameron secured was a mechanism to restrict the welfare supplements for citizens from other European Union countries who arrive in Britain, a benefit that is ordinarily available to people in low-paid jobs. There will also be changes to reduce the child benefit payments to non-British workers who come to Britain.

Mr. Cameron also secured guarantees that Britain’s financial sector will not face discrimination because the British have kept the pound and have no intention of adopting the single European currency, the euro.

He also achieved his demand to exempt Britain from the largely symbolic pledge to pursue “ever closer union,” which for some euroskeptics encapsulates the pursuit of a federal Europe that would supersede the nation-state. When the bloc’s treaty is next revised, it will be made clear that Britain is no longer bound by this obligation.

Ms. Merkel described this as “an emotional issue,” adding that she had agreed to the concession “in the spirit of compromise.”

As if those issues were not complicated enough, talks proved more difficult than expected, partly because efforts to negotiate a compromise were delayed as European leaders took time to debate migration, their other pressing concern.

The overlapping threats facing the bloc were underlined on Friday by suggestions that the Greeks might block the meeting’s concluding document if they did not receive reassurances that European states would not shut borders to stop migrants from moving northward.

Mr. Cameron’s deal initially was to be approved at an “English breakfast,” but it was delayed first to brunch, then to the afternoon and then to an “English dinner.” By early Saturday, the remaining differences were hammered out.

Always an awkward European partner, Britain joined the forerunner of the European Union in 1973 after more than a decade of trying. Even then membership was controversial, and after he came to power in 1974, the Labour prime minister, Harold Wilson, held a referendum in 1975 on whether Britain should stay in what was then called the European Economic Community.

Had Britain voted to leave at that point, its departure would have had relatively few implications because its membership was so new. But now, Britain is much more deeply integrated into myriad Europewide agreements in areas like international trade, climate protection and subsidies for farmers hashed out in Brussels, not London.

Among Europeans, Britons are among the least enthusiastic about membership of the bloc, according to opinion surveys. Britain is a net contributor to the European Union’s budget. In the 1970s, the British economy was stagnant, while continental Europe made gains, but that situation is now reversed.

The bloc’s long battle to save the eurozone from imploding in recent years, and its failure to craft a unified response to the migration crisis, has made the European Union look even less attractive to many Britons.

Although few of the migrants arriving in Europe during the past year have made their way to Britain, immigration still is a contentious issue because Britain saw a large influx of workers from Central and Eastern Europe after countries like Poland joined the bloc in 2004.

At the time, the government could have kept its labor market closed for several years — as countries such as France and Germany did — but elected not to.
Sunday, 21 February 2016