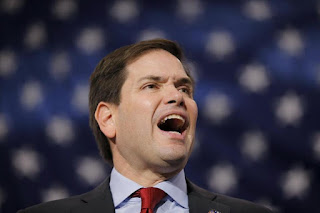 “Honestly, he cheated like a dog,” Trump said of the Texas senator Friday, standing at the center of a ballroom at a wooded, lush country club. “He holds up the Bible, and then he cheats.”

Rubio, trying to ride fresh momentum, campaigned with some of South Carolina’s top elected officials and warned voters of “dirty tricks from the Cruz campaign.”

Cruz kept a sunnier message, staying positive on the final day of a brutal primary race that remains incredibly tight, according to a number of polls released Friday.

Jeb Bush, seemingly stagnant in the polls and excluded from the top tier, campaigned with his 91-year-old mother, hoping Palmetto State voters might once again put a Bush on the path to the White House.

Voters will head to the polls on Saturday in what Republican Party officials are projecting will be a record turnout. It will cap a mean-spirited week that featured candidates threatening lawsuits, branding each other liars, and belittling opponents’ White House qualifications.

Trump and Rubio had somewhat different reasons for bashing Cruz. Trump wanted to block Cruz from making the sort of last-minute spurt that gave him a victory in Iowa. Rubio, enjoying a surge of his own, was trying to lift himself over Cruz into second place, which would represent a strong comeback for the Florida senator after a weak performance in New Hampshire.

Over the last 10 days, the Cruz campaign has lied, smeared, fabricated, and even Photoshopped,” said Rubio communications director Alex Conant. “We fear the worst dirty tricks are yet to come. .
The Cruz campaign will do anything to stop Marco Rubio’s momentum.”

From the kitschy stores of Myrtle Beach to the battleship in the Charleston harbor to the home-style cooking in the upstate region, the six Republican candidates stumped the state scrapping for any last bit of attention. The next phase of the campaign — with the Nevada caucus Tuesday followed by Super Tuesday on March 1 — will become more national in scope.

“We’ve been through a wild and wooly election season,” Cruz said, referring to the millions of dollars in candidate attack ads. “The time for all that nonsense is passed.”
The polls down the stretch have been volatile, with many voters saying they remained undecided. Trump has led in all of the polls but some show the gap narrowing between him and Cruz, who was in second place.

Rubio in recent days has enjoyed a boost of momentum that came from the coveted endorsement of Governor Nikki Haley of South Carolina, and polls showed him edging into a tie with Cruz. Bush desperately wanted the governor’s endorsement, given Haley’s strong approval rating in the state and her rising national stature.

Rubio’s appearances on the final day of campaigning Friday featured an image of diversity that many in the party are eager to promote: An Indian-American female governor, Haley, introduced a black US senator, Tim Scott, who then presented Rubio, the son of Cuban immigrants. 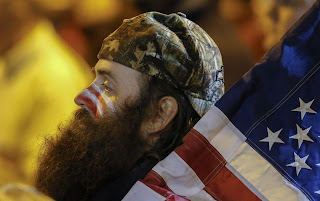 It looked like a Benetton ad!” Haley said of campaigning with Rubio and Scott, at a high school gym in North Charleston.


Rod Webber of Boston, Massachusetts, listened to Ted Cruz at a campaign event in West Columbia, South Carolina on Friday.

In a theater on the campus of the College of Charleston, Cruz brought out surprise guests one by one from behind a red velvet curtain: former South Carolina governor Mark Sanford, who announced his endorsement of Cruz; Cruz’s wife, Heidi; and Phil Robertson, a star from the realty show “Duck Dynasty,” in his trademark camouflage pants and long gray beard.

“Bibles and guns brought us here, and it will be Bibles and guns that keep us here,” said Robertson as he waved a Bible in one hand. The crowd roared.

Cruz later joked about making Robertson the ambassador to the United Nations.
“How much would you pay to see that?” he said, drawing more hoots and hollers from the audience.
Todd Ericsson, a 46-year-old Cruz campaign volunteer, accused Trump of ruining the primary, turning it from “an interesting conversation about destroying the establishment to making fun of each other’s mothers.”

“Trump has made it into reality TV, ‘The Real Candidates of the United States,’ ” Ericsson said.
He said the carnival atmosphere was apparent as he knocked on doors for Cruz. A woman told him she would not vote for Cruz because she heard he is an anti-Semite, Ericsson said. Another told him Cruz is not a Christian because she heard his father was part of a Catholic cult.
“How do you even address that?” Ericsson said. “Lies are one thing. These are just outright bizarre fabrications.”

Bush has hoped that South Carolina would give him the same kind of boost that it gave his father and brother during their campaigns in 1988 and 2000. He brought in his brother, the former president George W. Bush, for a large rally on Monday night.
He has spent more money on ads than anyone else, but he is fast losing opportunities to gain traction. If he doesn’t have a strong finish, he may lose the ability to persuade donors to keep his campaign alive.

John Kasich, who finished second in New Hampshire, vowed on Friday to “keep hanging in there” no matter what happens Saturday. The Ohio governor has been focused far more on doing well in heartland states that will vote in the coming weeks.
He skipped a day of campaigning in South Carolina to travel to Michigan, and he’s not planning to campaign in Nevada.

He reportedly joked during a town hall in Columbia on Friday that expectations have been so low in South Carolina that his voters could fit into a Volkswagen. “Now,” he added, “maybe you can put them in a van.”

Trump, on the other hand, drew large crowds throughout the day Friday. A pastor got up at his rally at Pawleys Island and prayed that on Saturday, “The Trumpsters will show up like never before.”
Trump urged his supporters to boycott Apple products, saying that the high-tech company should allow federal investigators to gain access to the cellphone of the planner of the San Bernardino, Calif., attacks.
“Apple ought to give the security for that phone,” Trump said. “What I think you ought to do is boycott Apple until such time as they give that security number.”
Trump has built his success with harsh attacks and defiance of political convention. He started the final week of the South Carolina campaign calling George W. Bush a liar and saying he failed to prevent the Sept. 11, 2001, attacks. He engaged Pope Francis in a war of words Thursday. He did not let up Friday.

“Bush has less chance than — let’s see, do we have any children in the room?” Trump said.
“Karl Rove is a bad guy. He’s just a bad guy,” he said of the Republican operative, before turning to several well-known conservative journalists. “George Will is a bad guy. Stephen Hayes is a bad guy. Charles Krauthammer is a bad guy.”

One of the few people he had a kind word about? Bernie Sanders, who he thinks he could defeat.
“I’ll be honest,” Trump said. “I don’t like to speak badly about Bernie. I’ll be honest. I sort of want him to win so badly. . . . I’d much rather go against him.”
Before concluding to the strains of “Eye of the Tiger,” Tr
ump returned to a theme of his campaign.