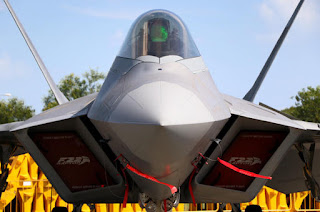 A U.S. F-22 fighter is displayed at the Singapore Airshow on Feb.17

SINGAPORE - The six-day Singapore Airshow opened on Tuesday. The biennial event, the biggest aerospace and defense trade show in Asia, is taking place as China deploys surface-to-air missiles in the South China Sea to tighten its grip on disputed islands in the area. The show is the virtual front-line of the confrontation between China and the U.S.

The highlight of the show is aerobatic displays of fighter jets, transport aircraft and drones. The U.S. Air Force's F-22 Raptor, which it calls "the world's most powerful fighter jet," made its debut at the airshow, although it stayed on the ground.

After North Korea conducted a nuclear test in January, the U.S. sent an F-22 squadron from Alaska to Japan. Two of the jets flew over the South China Sea and landed in Singapore.

"U.S. forces sent the F-22 to show U.S.'s technological progress and the strength of its partnership with Singapore," said Vice Adm. Joe Rixey at a news conference in the city-state one day before the air show opened. Although he only mentioned Singapore, the dispatch of the fighter jets was also a message to China.

The Chinese air force has been deploying fighter jets that are copies of Russia's fourth-generation fighters. The F-22 is far more advanced, with stealth capability and a cutting-edge radar system. It can spot enemy aircraft long before they see it, and shoot them down with air-to-air missiles. In any conflict over the South China Sea, a confrontation between a single F-22 and several Chinese fighters would likely be a turkey shoot, with the Chinese aircraft playing the turkeys.

The U.S. wants to maintain its technological edge, so it will not be peddling the F-22 abroad. Instead, it plans to export the single-engine, multirole F-35 to friendly countries. Lockheed Martin displayed a life-size mock-up of an F-35 at the show. The fighter has already found buyers in the Asia-Pacific region: Australia will purchase 72 F-35s, Japan will buy 42 and South Korea 40. With additional orders from the three countries and an expected purchase from Singapore, the U.S. may sell around 100 F-35s in the region.

Building on the cheap

The F-35 is a high end weapon for countries with money to spend. Many countries in Asia and the Middle East cannot afford this aircraft but are still eager to modernize their fleets. Lockheed and other defense manufacturers from the West and Russia are pitching their fourth-generation  jets to these customers.

French defense equipment-maker Dassault Aviation's Rafale, with its distinctive delta wing design, put on an aerobatic display at the airshow. Egypt and Qatar have decided to purchase the Rafale. It is also a leading candidate for India's plan to upgrade its fighter jets.

The Malaysian air force showed off its flying prowess, with a pilot in a Russian Sukhoi Su-30 wowing spectators with the "falling leaf" maneuver. The aircraft shoots into the sky, quickly cuts engine power and falls down like a leaf. Then it resumes normal flight. The pilot also performed the "cobra" maneuver, in which the plane flies level with the nose pointed upward. Russia and Iran recently agreed to begin joint production of the Su-30.
Sunday, 21 February 2016