US likely to stay tough on maritime issue 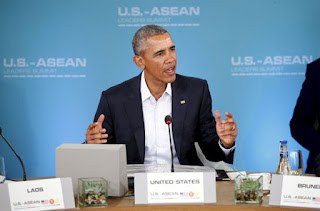 
Chinese observers have estimated that US President Barack Obama's administration is likely to stay tough on the South China Sea issue and pose more challenges to China's lawful maritime interests.
They made the comments as Obama voiced his ambition in making Asia-Pacific nations "play by the same rules" when starting a two-day gathering with the Association of Southeast Asian Nations (ASEAN) member states leaders at the Sunnylands Center in California on Monday.
Zhong Feiteng, an expert on Asia-Pacific affairs at the Chinese Academy of Social Sciences, noted that tension in the South China Sea is "still rising".
The US arranged the gathering as it believes its engagement in the maritime problems will receive a boost to its legitimacy if ASEAN offers support or silent approval, Zhong said.
"Since there are differing positions regarding the South China Sea issue within ASEAN, Washington hopes to coordinate such positions in order to counterbalance China and offset China's influence," Zhong said.
Xu Liping, a senior research fellow on Southeast Asia studies at CASS, said the South China Sea issue is increasingly vulnerable to geopolitical factors, because countries such as the US and the Philippines "have taken it for bargaining chips or trading of economic interests".
"China should be alert toward such calculations," Xu suggested.
On the economic part of the ongoing gathering, Teng Jianqun, a senior expert on US studies at the China Institute of International Studies, noted that Washington in recent years has been working on tackling the weak link of its ties with the ASEAN countries - economic cooperation.
Zhong Feiteng noted that as the ASEAN Community was established last year and the Trans-Pacific Partnership agreement was signed, the US expects an expanded economic influence in Southeast Asia, further tap into the market, and "shape new economic and trade rules for the next phase of the ASEAN development".
Washington also aims to promote its relationship with Indonesia, the largest economy within the ASEAN, Zhong added.
Saturday, 20 Februari 2016
Posted by Unknown at 02:58